This series of meetings will be delivered in a format of seminar talks that will include a lecture and a discussion afterwards. We aim to bring together Insaniyyat members and other anthropologists into a conversation about recent ethnographic research in/on Palestine, and beyond. Lectures will be delivered in either English or Arabic, according to the preference of each speaker. All meetings will be conducted online to allow broad participation. Interested friends from other disciplines are also welcome to join.

Follow this page for updated zoom links, and write to us at mail@insaniyyat.org if you would like to be in touch or if you have any questions or suggestions.

Abstract: In this talk, anthropologist Hadeel Assali argues for the geographical unmapping of the Gaza Strip through both historical and ethnographic study. Rather than taking the territorial entity for granted, ethnography and history instead bring into relief a geography of Gaza that is much more broad, which Assali refers to as Southern Palestine. Dominant and even critical discourses have kept Gaza trapped in "the Gaza Strip" while focusing almost solely on Israeli techniques of domination. However, the framework of "relational place-making" allows us to center and amplify Palestinians in Gaza as active agents in shaping and reshaping the world (and the material earth) around them. Abstract: The talk explores the connections between Muslim politics of piety and caring for the other, their social commitment and sense of citizenship. It focuses on Mustadafin Foundation, a Muslim organization that provides a range of social services to meet the immediate needs of poor communities in Cape Town; in particular their preparations, cooking, and distributions of a large amounts of food, to poor families in a variety of neighbourhoods around Cape Town. The ethnography unpacks how Mustadafin’s ethics of giving is an embodied politics of piety aspire one’s self-relation to God driven by its caring about the other, and sense of active citizenship, and social commitment. These various ethical dispositions toward the social, the other, and one’s self-relation to God are mutually constitutive of Mustadafin’s ethics of giving. Mustadafin social services are as such understood as a moral economy, amidst increasing poverty and social problems. Seeing Sadaqah as moral economy; on the one hand, foregrounds the role of religion in responding to every-emerging social. On the other hand, it illustrates that the embeddedness of the social and religious values in Islamic ethics of giving. The paper main argument is that Mustadafin’s ethics of giving is not reducible to self-relation to God to the exclusion of the other and the social. 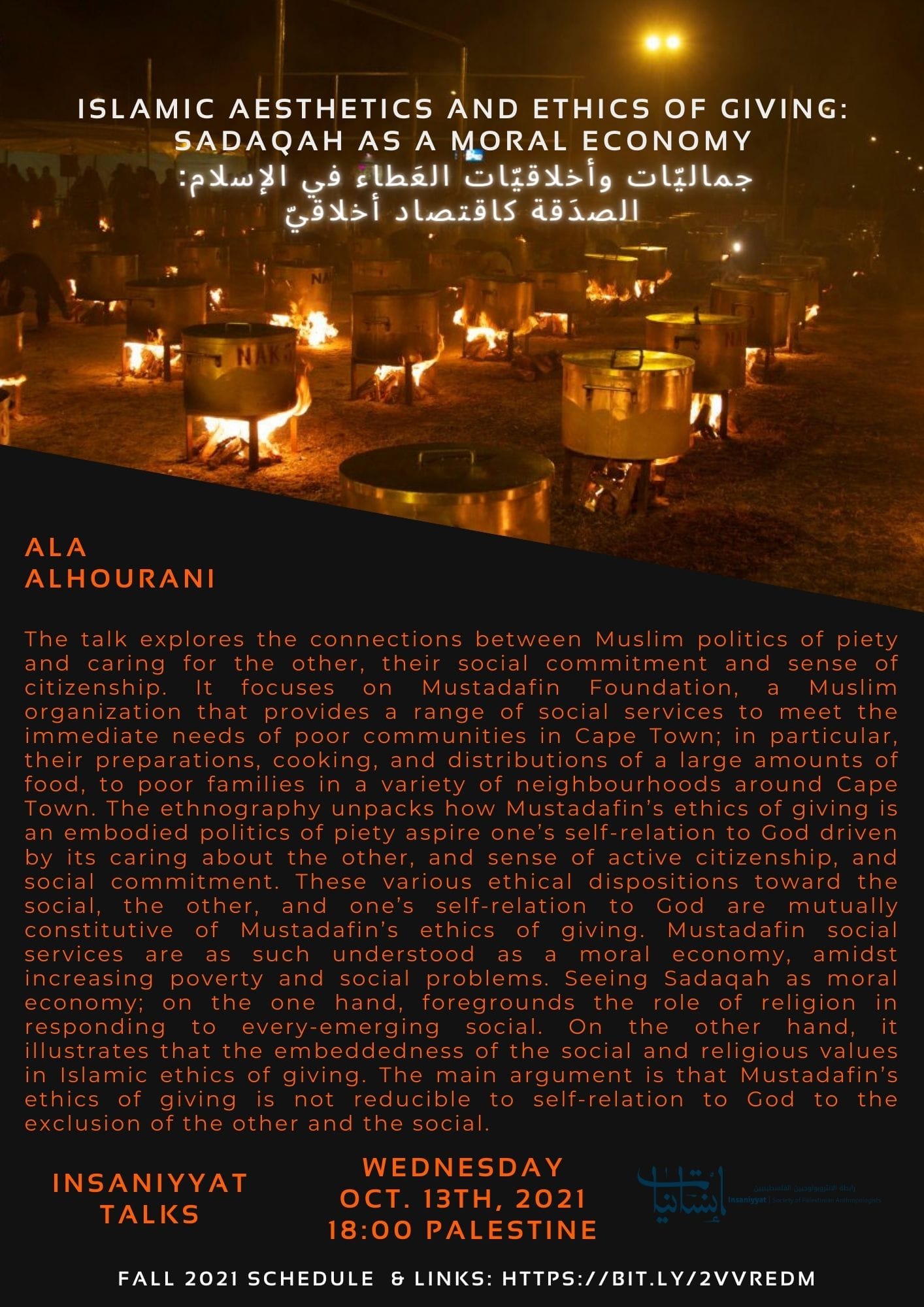 Abstract: Based on her book, Waste Siege: The Life of Infrastructure in Palestine, Sophia Stamatopoulou-Robbins in this talk offers an analysis unusual in the study of Palestine: it begins with the environmental, infrastructural, and aesthetic context in which Palestinians forge their lives, naming that context a “waste siege.” The author argues that to speak of waste siege is to describe a series of conditions, from smelling wastes to negotiating military infrastructures, from biopolitical forms of colonial rule to experiences of governmental abandonment, from obvious targets of resistance to confusion over responsibility for the burdensome objects of daily life. She focuses on waste as an experience of everyday life that is continuous with, but not a result only of, occupation. Tracing Palestinians' experiences of wastes over the past decade, and their improvisations for mitigating the effects of this siege, this ethnography considers how multiple authorities governing the West Bank—including municipalities, the Palestinian Authority, international aid organizations, and Israel—rule by waste siege, whether intentionally or not. The talk depicts waste's constant returns. It thus challenges both common formulations of waste as "matter out of place" and as the ontological opposite of the environment, by suggesting instead that waste siege be understood as an ecology of "matter with no place to go." Waste siege thus not only describes a stateless Palestine, but also becomes a metaphor for our besieged planet. 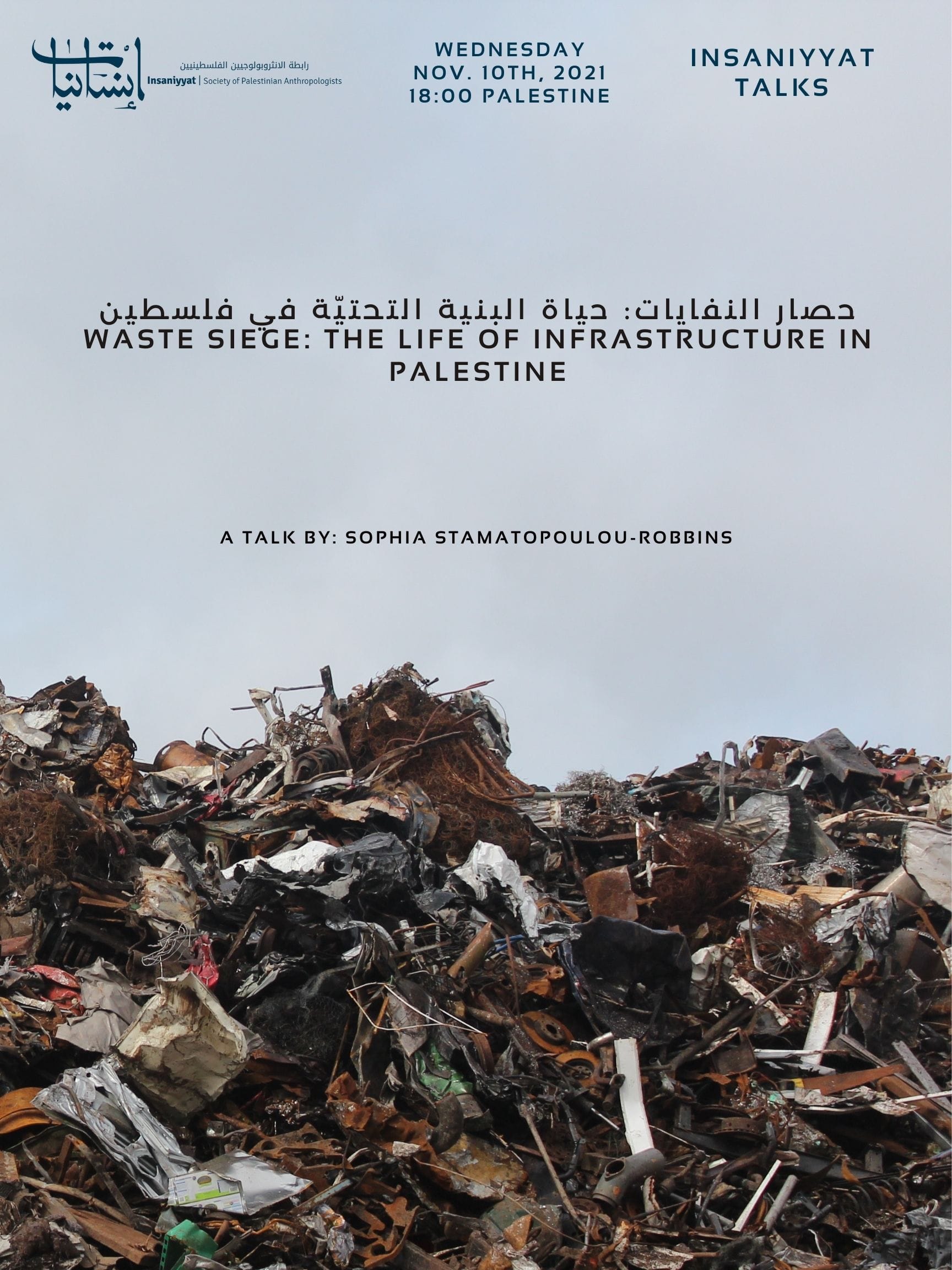