When shelter-in-place began in northern California in early March, I immediately did two things. First, I canceled my flight to Tel Aviv, originally scheduled for the end of March, for my year of dissertation fieldwork. Second, I signed up for ten weeks of Arabic practice over Skype.

Omar,[1] a software engineer in Gaza City, is my teacher. We are the same age, and my husband is also a software engineer, so we got along quickly and easily. I warned him that I had changed my flight to early May; perhaps we would be completing the second half of my lessons after I arrived in Jerusalem. Nearly six months later, I am still at home in Oakland, learning Arabic from afar while I contemplate when—or if—I will be able to leave.

In the beginning of quarantine, when family and friends asked when I was going to the field, I would smile and claim, “I’ll be leaving in a few months.” As time passed and the same question kept coming, I crankily replied, “I will know when this is over at the same time as everyone else.” Then, I settled past anger into a state of limbo, my hesitance to accept what perhaps will be an inevitable decision the longer the pandemic unfolds on a global scale:  that I will not be able to do ethnographic dissertation fieldwork in Palestine. I am stuck at home, and at the same time feel totally unmoored.

Mourid Barghouti, reflecting on his return to Palestine after thirty years of exile, wrote, “Why does everyone in the world think that his particular situation is ‘different’? Does a man want to be different even in loss?”[2] Omar, my teacher, stuck in Gaza City, expressed related, but distinct sentiments. “What happened in the whole world made us [in Gaza] feel a bit lucky, because there’s no place that’s really better than the others under COVID,” he said. The rest of the world, according to Omar, was now facing the movement restrictions and economic precarity that have become normalized in Gaza under siege.[3]

Two days into shelter-in-place, I sat with Omar’s insight, thinking through the connections between California and Palestine in a time of COVID. At first glance, my home in California and Omar’s in occupied Palestine have little in common: California’s economy exceeds that of the entire United Kingdom, while Palestine is a non-sovereign “state” which has been forcibly de-developed by decades of direct and indirect Israeli settler-colonial policy.[4] California is understood as a discrete and whole geographic place, while Gaza is often cut off from the rest of Palestine. However, upon further reflection, material and philosophical connections between California and Palestine during the pandemic became surprisingly easy to grasp.

First, both California and Palestine had some of the earliest and strictest state quarantine policies. Second, labor forces usually deemed contagious and surplus by the state had suddenly been  exempted from such restrictions because of their designation as “essential workers”—essential to keeping capitalism afloat and coerced into continuing to work due to intense economic precarity. In California, workers in grocery stores, hospitals, and farms, the majority of them from historically marginalized populations, account for the highest rates of COVID.  Likewise, Palestinian workers from the West Bank suddenly found themselves with the choice of remaining in Israel and vulnerable, or home and unemployed. Those who chose employment and were exposed to COVID were physically abandoned at checkpoints.

Finally, I shared with Omar in Gaza the surreal feeling Palestinians have expressed particularly in the post-Oslo era: the feeling of being displaced at home. “Exile is more than a geographical concept,” Mahmoud Darwish said. “You can be an exile in your homeland, in your own house, in a room. It's not simply a Palestinian question.” Omar’s family is from Jaffa; he grew up around the Gulf and returned to Gaza in the past decade. “I was born outside of Yaffa, and when I came back, I came back to Gaza,” he told me. “I want my identity back. I’m a Palestinian and I live in a Palestinian territory, but I feel like a refugee all the time.” Omar situates Israel’s expulsion of his family as the root of his economic precarity that keeps him, a trained engineer, teaching Arabic in the middle of the night for a meager income. Like the lasting effects of COVID-19 on a body we are only starting to understand, displacement is chronic: “A person gets ‘displacement’ as he gets asthma, and there is no cure for either.”[5]

My feeling of displacement from Palestine is a mix of pressure to deliver a promised dissertation, guilt of letting down my Palestinian research partners, and sadness over my distance from friends in Palestine-Israel. However, I live only an hour from where I grew up, a settler on land dispossessed from the Chochenyo Ohlone people. While I, as others, have theorized Jewish diaspora as a corrective to Zionism, my Jewish “exilic condition” cannot be separated from US settler colonialism and material infrastructures (such as stable housing and relative economic security). I am not “displaced” as a refugee from my homeland. Thus, I do not wish to collapse the structural differences between Omar and my experiences. In addition to our positionalities as a Palestinian man and Jewish woman, another visible difference is infrastructural challenges to our Skype lessons. We never use video, only voice, because Omar’s internet in Gaza City is poor. We have frequently ended lessons abruptly or canceled them outright because Israel has withheld gas from Gaza’s electrical stations and his generator has run out of gas. Comparing the difference between California and Palestine makes me skeptical of any universal narrative of global “suffering in the time of corona.”

One day, though, Omar mused, “Do you think people will have more feelings for Gaza, now that they have lived through like what we have?” His question on the possibilities of transnational solidarity during COVID also exposes how Western solidarity with Palestine often relies on colonial power dynamics which essentialize a “sameness” between Palestinians and others.[6] However, in recent months I have received many messages of support and empathy from Palestinian friends, expressing anger at state violence against communities of color from both COVID and policing. These communications challenge the colonial nature of solidarity which presupposes that solidarity always travels from “the West” outward. This summer, Omar and I spoke frequently about how, strangely enough, while case rates in Oakland were skyrocketing, in Gaza, they were tentatively holding fast. (Even with the news of community spread of COVID in Gaza starting in August, its intense isolation has largely spared it the voracious spread as has been seen in the West Bank and Israel.) We express concerns for each other’s family’s health. When I took a break from lessons due to protests in the aftermath of the police killing of George Floyd, he messaged me worried, “Please contact me to tell me that you are fine!” These moments of care reflect the nature of a solidarity that “suspend[s] claims to exceptionalism” [7] within global movements against racial apartheid, settler colonialism, and capitalism.

Reflecting on Israel’s 2014 bombing of Gaza, Sherene Seikaly noted that “exodus, displacement, grief, and searching for refuge are not specific to this moment.”[8] So, too, the lessons from Gaza and Palestine during the time of COVID are neither exceptional nor universal. In a global pandemic, when so many of us are searching for guarantees of safety from neglectful states that never come, the need to continue my conversations with Omar and other Palestinians about what we can do for each other to temper the isolation of displacement feels more necessary than ever.

[1] Pseudonym used, all stories and quotes used with permission.

[3] Israel’s dismantling of the Gush Katif settlements from the Gaza Strip in 2005 allegedly signaled the end of direct Israeli occupation. In reality, the fifteen years hence has seen Gaza be “hermetically sealed” by Israel’s blockade (Tawil-Souri and Matar 2016, 4). Israel controls the movement of people, goods, and infrastructure in and out of the strip; controls maritime and airspace along with all land crossings except for the Rafa crossing with Egypt; and directly surveils Gaza’s populations with military technology as well as frequent direct violent attacks of aerial bombings. See Helga Tawil-Souri and Dina Matar (eds.), Gaza as Metaphor (London: C. Hurst & Co, 2016).

Leroy, Justin. “Black History in Occupied Territory: On the Entanglements of Slavery and Settler Colonialism.” Theory and Event 19, no. 4 (2016): 1–10.

Gabi Kirk is a PhD candidate in Geography with a Designated Emphasis in Feminist Theory & Research, at University of California, Davis. Her work straddles political ecology, feminist studies, and geographies of colonialism and settler colonialism. Her dissertation project examines how Palestinian fair-trade olive and almond farmers and sustainable development institutions in the northern West Bank use agro-ecological practices to challenge normative notions of indigeneity and sovereignty.  She also examines the contested nature of indigeneity in Palestine-Israel, interrogating Zionist claims to “Jewish indigeneity” through environmentalism. She is interested in the militarized landscapes and infrastructures of settler-colonial societies more broadly, and has a project examining the transnational circuits of racial capitalism through agricultural scientific expertise between California and Palestine-Israel. She is a co-organizer of the Left Coast Political Ecology network and UC Davis Political Ecology Lab, and a co-editor for Jadaliyya’s Environment page. She grew up and currently lives in the San Francisco Bay Area (Ohlone lands).

Acknowledgments: My deepest thanks to Omar for sharing with me, and the NaTakallam language partners program. Thank you to Sarah Ihmoud and Nayrouz Abu Hatoum for your support and editorial eyes, and to Kayla Palakurthy for early support. Thank you to my loved ones for getting through this time together. 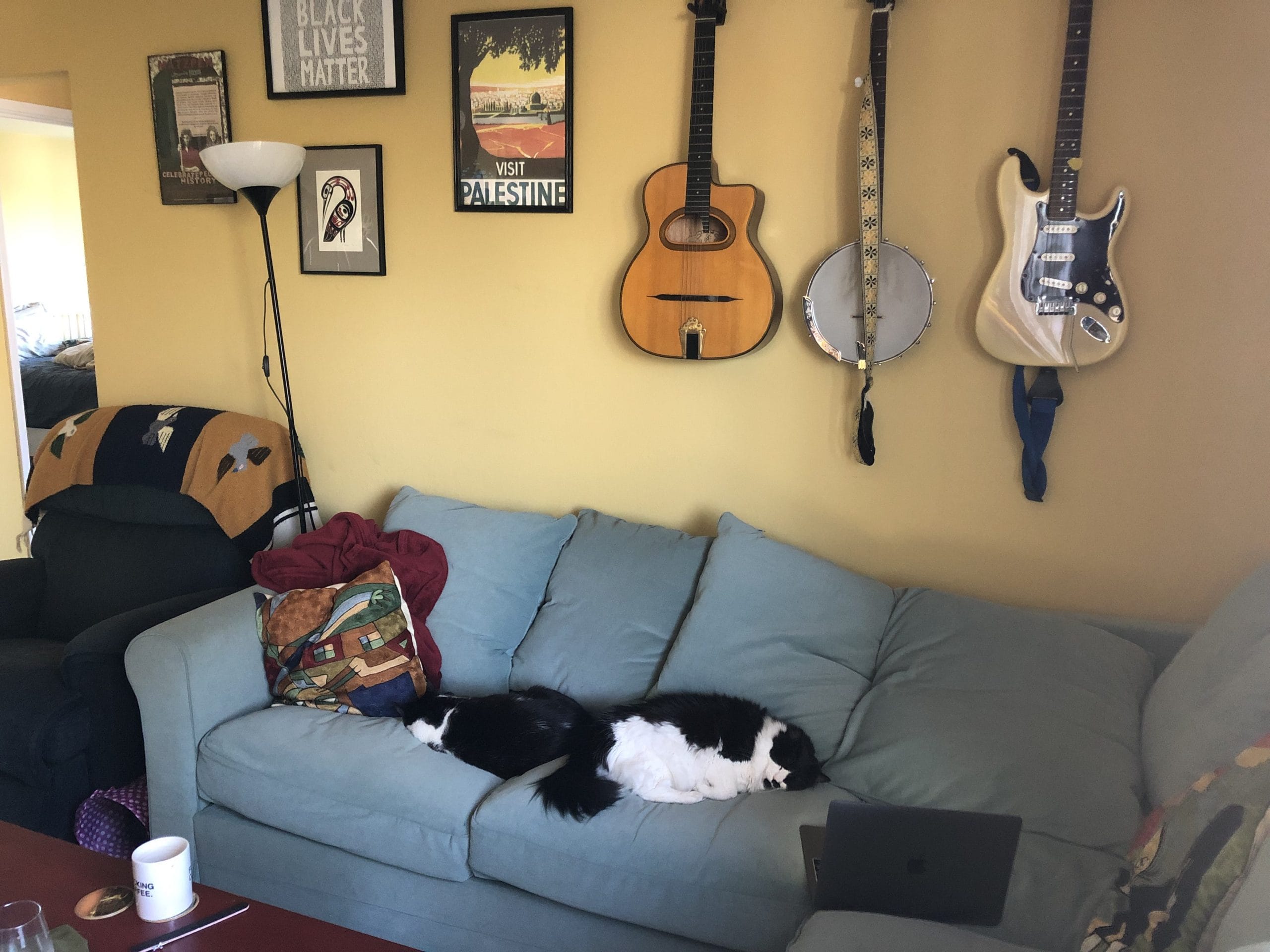